The Accidental VC: How One Audacious Woman Turned A Receptionist Job into a Successful VC Career 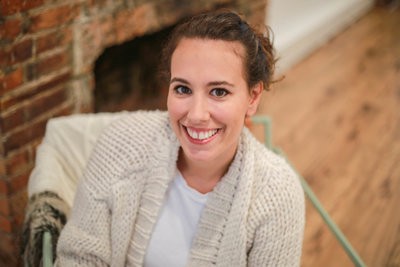 The most incredible story of how polyglot Elodie Dupuy broke into VC and later co-founded Full In Partners, a successful software-focused growth equity fund based in New York City. Plus tips for budding entrepreneurs and current venture capitalists on success.

Elodie Dupuy started off her career as a receptionist at a VC firm. It was a temporary job while applying to law school. Very quickly, Dupuy knew that she had more to contribute beyond the role of reception. She knew nothing about investing or even really what her firm was doing, but pieced together that they maybe “owned a piece of the internet and was selling it.”

Having watched the firm investment analysts spend their days talking on the phone, Elodie decided she could do that job. Her logic was “I’m really good at talking and I also speak 7 languages,” so she went to the CFO and convinced him to give her a six-month trial to expand the business globally. Then offered helpfully, “and if I’m terrible you can fire me.” Suffice it to say, she was not terrible. In fact, she leveraged her unique knowledge and talents as a native French speaker to create opportunities for the company.

Within months, Dupuy began supporting an investment opportunity in France and became indispensable when she was able to translate and mitigate differences in culture. She capitalized on her success with the French to leverage other opportunities in Europe during the U.S recession. Perks of her job? She was able to practice her seven languages and got a free passport: “Anywhere in the world that I found a good deal, I got to travel there for free.”

Travel perks or not, however, after a decade Dupuy became disenchanted with her career. Dupuy’s career crisis was first provoked by the book Disrupted. The content of Disrupted really resonated with many of the issues that Elodie had witnessed first-hand, and in particular the notion that while VCs place a lot of bets, the people working the 80 hr work week are often the least protected share class. And more importantly, that there is very little accountability to VCs. “They are judged on the performance of their fund, not the individual company outcomes and so don’t hold themselves accountable to individual company outcomes,” Dupuy said.

As she was considering options outside of VC, Dupuy was recruited to a firm in San Francisco, where two events changed her trajectory.

Dupuy had a pivotal encounter with an extremely accomplished woman who “could raise a billion dollar fund if she tried.” When Dupuy asked why this woman hadn’t struck out on her own, “she responded with a bunch of justifications, and I remember thinking — you were scared? I didn’t want that to be my reason when a young woman asked me why I didn’t try.” Around that time, Dupuy also had a key realization at work: she might not be a good culture fit, because “you can’t be someone’s employee and be the boss… and I wanted to be the boss”

It was a few months later when a wealthy acquaintance asked Dupuy “what would you do with a five hundred million dollar fund?” Dupuy was surprised at how quickly she could identify all the things she would do differently to improve the system. After that, she couldn’t stop thinking “why aren’t I doing that!?”

Dupuy went back to NYC where it felt like “every firm and their brother were trying to hire a woman in the wake of the Me-Too movement.” Dupuy had 23 interviews, all within 6-weeks. “It felt like everyone wanted to check a box that they had a woman,” Dupuy said speaking of her interview experience, “when I asked them to point out a deal in my past that was a good fit for their firm, most of them came up empty handed. I got some comments about wanting strong women to drive culture change, but I didn’t think they actually wanted my opinions, they didn’t actually want somebody who wanted to drive change.”

Having already decided to start her own firm, on June 21, 2018, just two weeks after welcoming her baby girl, Dupuy agreed to one last meeting with a partner who wanted to convince her to join his firm. Dupuy came to the meeting with her newborn in her arms. “After the meeting, the partner looked at me and asked, ‘so…do you think you’re going to come back to work after this?’ I was so shocked and realized in that moment that this wasn’t about me. It didn’t matter that I had already had one baby and come back to work and performed. This person had a perspective of what it was I wanted and I wasn’t going to be able to change their minds, not with words and not even with actions. I walked out and called my husband to tell him that was it. I was burning all the boats.” Like the Vikings who burned their boats to signal there was no going back, she set off on the next leg of her quest.

Elodie designed a series of tests to validate her chances at raising a fund, and despite repeatedly checking off boxes ahead of her schedule, she also had to fend off doubts people tried to impose on her.

“People asked me, ‘is now really the right time to be starting a fund?’ and I say ‘Jeff Horing started Insight when his wife was pregnant with a kid, so he started his firm when he was having a baby. I’m starting a firm when I’m having a baby. Yes, I’m carrying that baby. I’m sure I’ll be a little bit more tired but it’s no different. I don’t understand why you’re imposing your views of risk on me.”

She later shares, “Ultimately, it seemed less risky to start my own firm than to take a job at a firm who didn’t share my vision for how things should be done, and try to fit into a culture that I’d never fit into”

Dupuy shared many other valuable insights with us. Here are a few more with our ‘accidental venture capitalist’ and fund partner:

What allowed your portfolio companies to survive and, for some, even thrive during the COVID-induced economic downturn?

Meticulous planning and metrics. We are professionals at assessing risk. During the first downturn in ‘08-’09, we got to see what companies survived. Those companies were economically viable, had strong business models, and had quality customers. These durable companies were able to fuel their own growth at a time no one else was growing and had a positive net dollar retention rate. That’s why we’ve decided to invest in software. People buy software in a boom and in a recession because it makes things more efficient.

Is there a business case for investing in women and people of color?

We are data-driven people; show me data that supports the thing and we’ll do it. If you look at data on diverse teams, it’s overwhelmingly a good idea. Make sure sourcing is less and less of a personal decision and more and more driven by data.

Park your fear at the door. Don’t be afraid to do dumb things. I’ve always admired how my male colleagues seemed unafraid of making mistakes or of being judged for being wrong. You can’t get anywhere without making mistakes. You’ll never grow. You must abandon that fear and know that it’s not about you. If you’re not going to lose a million dollars and nobody is going to die, then do it. Try it and just learn from it.

Beyond The Billion™(BTB), launched by Sarah Chen and Shelly Porges, the Founders of The Billion Dollar Fund for Women™(TBDF) was founded to address the gender venture investment gap where women-founded teams receive less than 3% of total VC funding. In less than a year, TBDF mobilized a global consortium of over 90 venture funds committed to investing $1Bn in women-founded companies. Following this achievement, Sarah and Shelly launched BTB with a mission to further catalyze the larger landscape of capital, ensuring the continued capacity to invest in women-founded companies by bridging venture funds and limited partner investors. These include institutional investors such as endowments, foundations, international financial institutions, and development financial institutions; as well as strategic corporates, family offices, wealth managers, and high net worth individuals to drive the agenda and capital, collectively.

Mardiya is an intern at Beyond The Billion, and also student at Cornell University majoring in Applied Economics and Management (Dyson) and concentrating in Entrepreneurship. Mardiya is minoring in Inequality Studies and the History of American Capitalism. Mardiya is passionate about gender and racial inequities in the Venture Capital space and conducts research with Women Entrepreneurs at Cornell to bridge the gender gap and define the business case for investing in female founders. On the side, Mardiya does research with the Cornell Higher Education Review on increasing accessibility to higher ED and the student debt crisis. On-campus, Mardiya is a part of BSU, SOSA, the Business Student of Color Coalition, and Ivy Untold. If you can’t find her reading creative non-fiction, playing basketball, or discussing systematic issues with her friends, there’s a good chance she’s watching Netflix.