Funding The Next Wave: When Black Women Innovate 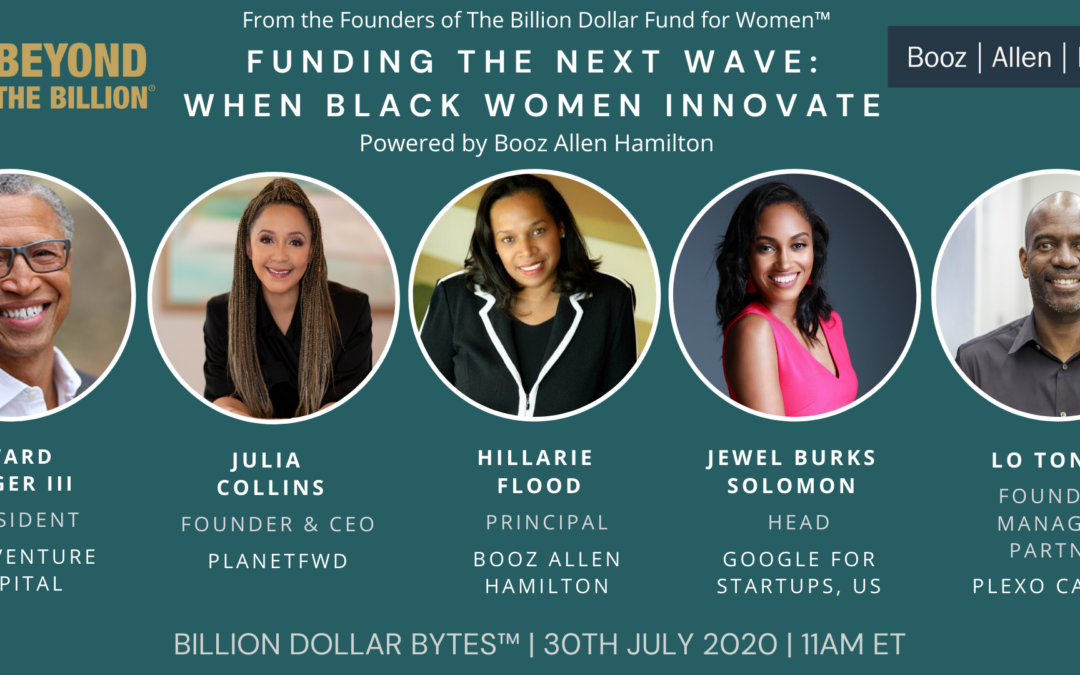 This episode of Billion Dollar Bytes™ brought to you by Beyond The Billion™, powered by Booz Allen Hamilton, is a virtual series focused on fueling women-led innovation.

Imagine if Bill Gates, Mark Zuckerberg, Jeff Bezos or Steve Jobs had been born Black. Do you think they would have realized their potential? And, imagine if each of these successful founders also had a Black sister who was equally innovative, equally educated, and equally resourceful. Would she have realized her full potential? Would any of them have been able to access the funding necessary to start their companies and scale their innovations?

Clearly, not all innovators benefit equally from the venture capital system in our country. The Billion Dollar Fund for Women™ was launched in October 2018 to address the massive gender venture funding gap with female funders then only receiving less than 3% of all venture funding. And yet, we know that women are not the only ones who face unconscious bias when it comes to venture investing. Founders and funders of color face structural barriers, embedded bias, and other forms of racism when building their businesses and raising capital.

The stats tell the story:

– Blacks are underrepresented among startup leaders by 82%

As importantly, when Black Female Founders innovate, they bring a unique experience and perspective to the innovations we get to benefit from and the returns investors can realize.

Join trailblazers in innovation as they share their stories and experiences with Black Women Who Innovate and how we can ensure that those of us deploying capital are Funding the Next Wave.

Lo is the Founding Managing Partner of Plexo Capital, which he incubated and spun out from GV (Google Ventures), based on a strategy to increase access to early-stage deal flow. Plexo Capital invests in emerging seed-stage VCs and invests directly into companies sourced from the portfolios of VCs where Plexo Capital has an investment. Investors in Plexo Capital include Alphabet, Intel Capital, Cisco Investment, the Royal Bank of Canada, Kapor Capital, the Hampton University Endowment, the Ford Foundation, family offices, and technology executives.

Prior to founding Plexo Capital, Lo was a Partner on the investing team at GV, where he focused on marketplaces, mobile, and consumer products. Before GV, Lo was a Partner with Comcast Ventures, leading the Catalyst Fund and worked with the main fund focusing on mobile messaging marketplaces. He also worked with Zynga as the GM of Zynga Poker with full P+L responsibility For Zynga’s largest franchise at the time. During his leadership, web bookings increased by over 150% with margin expansion. Lo has also held executive roles with Nike + eBay as a startup funded by top tier investors. Lo received his M.B.A from the Haas School of Business and received his B.S from Hampton University in Virginia.

As Head of Google for Startups in the United States, Jewel Burks Solomon works to level the playing field for diverse startup founders and communities by connecting them with the best that Google’s products, skills, and people have to offer.

In addition to her role at Google, Jewel is an advocate for representation in and access to the technology industry. She currently serves as Managing Partner at Collab Capital, an investment fund to connect Black founders to the financial and social capital they need to build profitable businesses. From 2013 to 2016 Jewel was CEO and co-founder of Partpic, a startup that was acquired by Amazon, which streamlines the purchase of maintenance and repair parts using computer vision. Before founding Partpic, Jewel served in management, enterprise sales, and strategic diversity roles at McMaster-Carr Industrial Supply and Google, Inc. Jewel is a native of Nashville, TN and graduate of Howard University. She is a member of the 2019 Class of Henry Crown Fellows within the Aspen Global Leadership Network at the Aspen Institute.

Ed is a pioneering impact investment leader. He has managed venture capital funds for over 23 years on behalf of institutional investors committed to profitable, yet socially responsible investments. To be specific, he managed The UNC Venture Funds as President of UNC Partners, Inc. These funds focused on emerging and acquired companies operating in growth-oriented industries. This experience provided Ed with extensive investment experience in such areas as computer and digital technology; commercial air transportation; consumer products; broadcast media, commercial and residential real estate development; and environmental services. The capital of the Funds was invested to consciously expand business opportunities for entrepreneurs of color and attracted over $1 billion of co-investments and financing for the growth and development of portfolio companies.

Julia Collins is a serial entrepreneur who spent her career building food companies, including Zume Pizza where she became the first Black woman to co-found a unicorn company. Today, Julia leads Planet FWD, a company on a mission to tackle climate change by expanding regenerative agriculture adoption through a sustainable ingredient platform alongside a climate-friendly snack brand.

Julia serves on the board of Black Girls Code and the All Raise operating committee. She sits on the Launch with GS advisory council and is an EIR for Cleo Capital. Julia is an active angel investor focused on female and BIPOC founders.

Hillarie Flood is a global product and marketing executive with a breadth of knowledge in the software and technology industries across the US, EMEA, and Asia Pacific regions. She has a reputation for crafting strong teams that drive innovation, and accelerated results through market-changing insights and a focus on customer success. Currently, Hillarie is the executive lead for Business Excellence strategies for Booz Allen Hamilton’s Solutions division. She is the firm’s expert in aligning risk management, go to market fundamentals, deal shaping, and executive sponsorship with emerging intellectual property. Hillarie started her career at Microsoft Corporation as a Product Manager launching enterprise servers as well as small business and consumer products through retail and OEM around the globe.

Following her tenure at Microsoft, Hillarie joined America Online (AOL) to lead the diversification of its Safety and Security product portfolio in pursuit of revenue growth from AOL subscribers and the web at large. At AOL, Hillarie also championed her passion for mentorship and even contributed to Time Warner’s Breakthrough Leadership program which was a closed cohort of 25 executives focused on developing high-potential women leaders. Hillarie then joined Verisign to build a product team in the Naming group and ultimately assumed responsibility for global channel and product marketing for all of Naming Services. Hillarie subsequently accepted a position with Intersections Inc to expand the product portfolio to include Privacy, Security, and Fraud Protection services for B2B and B2C delivery.

In 2014, Hillarie joined Booz Allen Hamilton as the firm instantiated its Solutions Business alongside its foundational management consulting services. Hillarie holds an MBA from the University of Michigan and a BS in Applied Mathematics and Economics from Brown University.

For more than 100 years, business, government, and military leaders have turned to Booz Allen Hamilton to solve their most complex problems. As a consulting firm with experts in analytics, digital, engineering and cyber, we help organizations transform. We are a key partner on some of the most innovative programs for governments worldwide and trusted by the most sensitive agencies. We work shoulder to shoulder with clients, using a mission-first approach to choose the right strategy and technology to help them realize their vision. With global headquarters in McLean, Virginia, our firm employs nearly 27,000 people globally, and had revenue of $6.70 billion for the 12 months ended March 31, 2019.

ABOUT BEYOND THE BILLION™

Check out our recent piece on why now, more than ever, we must fuel innovation by women, and catch up on our last Byte on Funding Innovation in a Time of Crisis!