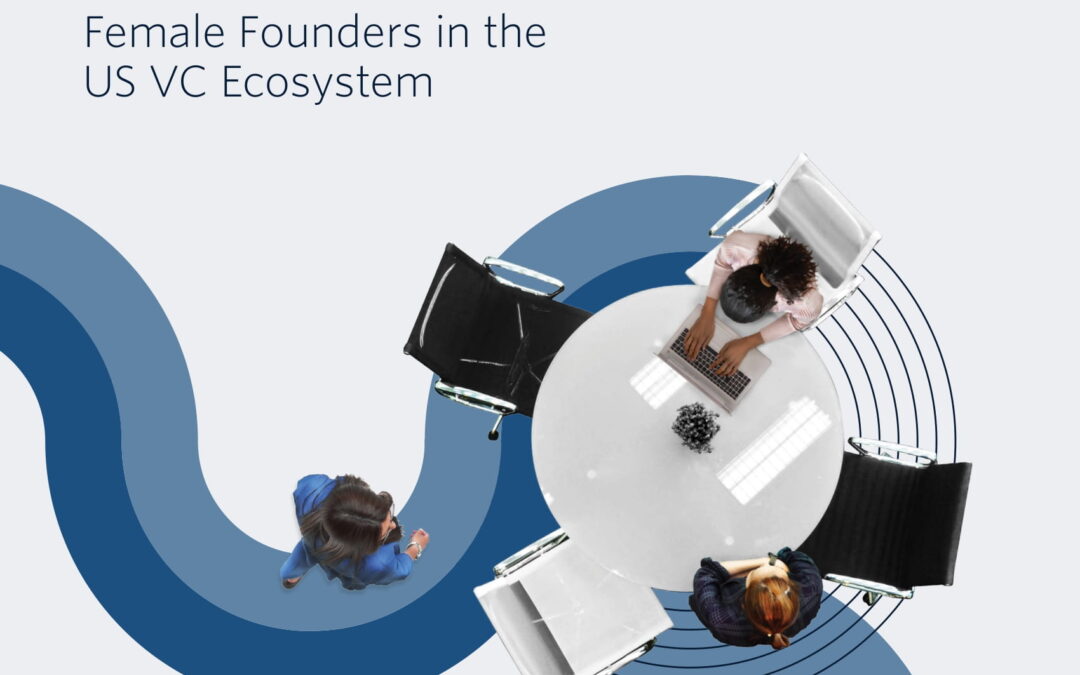 SEATTLE, Nov. 3, 2022 –– PitchBook, the premier data provider for the private and public equity markets, today released All In: Women in the VC Ecosystem, its fourth annual report examining US venture capital (VC) investment in female-founded startups and the role female investors play in their success. The report, published with support from Beyond The Billion, J.P. Morgan, Pivotal Ventures and Apex Group, found female founders have weathered ongoing market volatility to post the second-highest deal value figures on record. In fact, across most metrics year-to-date, female-founded companies proved the strength of their startups, dispelling fears that this market downturn would disproportionately impact female founders like the COVID-19 pandemic did in 2020 (2021 All In report). In this difficult market, female founders had lower median burn rates, greater valuation growth at the early stage and lower valuation declines at the late stage compared to all-male founded companies year-over-year. Angel investment and unicorn deal value among female-founded companies have both reached their second-highest annual levels. And, although exit activity fell sharply along with the rest of the VC ecosystem in 2022, female-founded companies continue to outperform the broader market when it comes to the median time it takes to exit.

Despite these wins, female-founded companies still represent only 25.5 percent of total VC deal count within the broader ecosystem – a slight dip from 26.4 percent in 2021. In a recent survey of VC investors attending the 2022 Web Summit, 32 percent of respondents said they had not made any investments in female-led startups in the past year and 27 percent said increasing representation of women and minorities in their firm or portfolio was not an area of focus at this time. Check-writing authority remains largely male dominated and can have significant impacts on the capital-raising process for female founders. In fact, just 4.5 percent of firms have a majority female decision-maker population, which means that most institutional investors are operating in male-dominated environments. Given female checkwriters are more likely to invest in female founders, any progress in representation at the institutional level could lead to a long-term ripple effect on the headline numbers for years to come.

“Female founders are consistently showing up as high-performing startups, but they remain at a disadvantage when forced to pitch to predominately male checkwriters,” said Annemarie Donegan, analyst at PitchBook. “Check writers are a driving force for diversity in the VC ecosystem and the lack of female representation in firms has a ripple effect on the founders they invest in as well as the LPs that trust them to generate returns. Promoting and recruiting female check writers can open doors for more female founders and diversify portfolios. There is still much progress to be made within VC firms along with the startups that receive their funding.”

Following the methodology of the first three All In reports, PitchBook analyzed investment activity in US-based startups with at least one female founder. The report also includes a spotlight on female angel investors and GPs and breaks down funding activity within specific US regions and sectors, including tech, healthcare, and fintech.

Key Takeaways Uncovered by PitchBook’s 2022 All In: Women in the VC Ecosystem Report:

About PitchBook
PitchBook is a financial data and software company that provides transparency into the capital markets to help professionals discover and execute opportunities with confidence and efficiency. PitchBook collects and analyzes detailed data on the entire venture capital, private equity and M&A landscape—including public and private companies, investors, funds, investments, exits and people. The company’s data and analysis are available through the PitchBook Platform, industry news, and in-depth reports. Founded in 2007, PitchBook has offices in Seattle, San Francisco, New York, London, and Hong Kong and serves nearly 100,000 professionals around the world. In 2016, Morningstar acquired PitchBook, which now operates as a subsidiary.

Shelly Porges, Co-Founder and Managing Partner at Beyond The Billion

“In 2022, the key question we must ask ourselves is “Are women getting the ‘leftovers’ from VCs who feel little pressure to change how they do business?” Despite the fact that the world is looking for breakthrough solutions to some of our most intractable problems and women are innovating and delivering on these, our inability to transform a broken VC ecosystem prevents us from benefiting from these solutions and realizing the financial rewards of doing so. This year’s Pitchbook Report on which we are proud to partner, continues to demonstrate that women and gender-diverse teams outperform others in terms of earlier exits and higher valuations, even in a down-market. What does it take for investors to act on this data to ensure they not only have female founders in their deal flow but also founders being approved by their investment committees? We look forward to continuing this conversation with our partners and sharing the strategies of these investors who have made these changes and have benefitted from the outperformance women deliver.”

Sarah Chen-Spellings, Co-Founder and Managing Partner at Beyond The Billion

“Again and again, we see how female founders and gender diverse teams continue to outperform: with quicker exits, greater valuation growth and lower valuation declines at the late stages; and yet they remain underinvested. Against the backdrop of a tough fundraising climate, markdowns of previous vintages, and yet a lot more dry powder in the hands of VCs that were able to raise, it is now more important than ever to remain steadfast on the goal of bridging this gender venture investment gap with serious intentionality. It’s easy to “slide back” into bad habits of pattern-matching, where the perceived patterns of success still do not include women and people of color, despite the clear data as affirmed in this report. LPs and GPs have a role to play, and it is time to vote with the power of the check.”

“At Brown Advisory, we take an intentional, programmatic, approach to private market investments. But leaning into illiquid investments during times of turbulence is easier said than done. Long-term investing requires partnership— with managers, entrepreneurs and investors—that are aligned not just from a time perspective but also in terms of values. In GPs, we seek demonstrable thought leadership that can translate into durable business building. We believe great investors are found in a host of areas—no one type of firm, whether large or small, holds a monopoly in this regard. And, because great investors are found in many places, we cast a wide net. Similarly, we seek to invest with entrepreneurs who stay a step ahead of their peers, who are positioned to take advantage of differentiated networks and who utilize asymmetric data to their advantage. We believe the perspectives of diverse founders can be an outperformance edge within an increasingly crowded marketplace. We believe in the power of private businesses to spur growth and innovation. As a result, we are deliberate in the attention we pay to investing in women founders and advising women on investing. A focus on allocation of capital to fund the best ideas – from multiple vantage points – aligns well with a performance-first mentality. Accordingly, diverse talent is one factor we consider in our investor portfolios today. And we believe this exposure has the potential to drive returns well into the future.”

“The 17 percent of venture funding that goes to female-founded companies tells us a lot about both the challenge and the opportunity in front of the industry. On the one hand, it reflects the fact that when it comes to VC support for women-led startups, the trendlines are moving in the right direction. On the other, 17 percent is nowhere near parity, a reminder that progress isn’t happening fast enough. Pivotal Ventures supports diverse founders and fund managers because we want to demonstrate that investing in entrepreneurs who bring a different perspective can generate significant returns. To tap into the opportunities it’s been missing, the investment industry is going to need to challenge itself to think in new ways and find a new approach to evaluating opportunities that leaves yesterday’s biases behind. We are excited to help make the case that putting more funding behind women and their ideas ultimately benefits everyone.”

Returns will be driven by those who have a truly unique value proposition that resonates with the founder market.  LPs should be looking for funds who have found “product market fit” with founders, as defined as an ability to win an investment on a dimension beyond price.  Additionally, LPs should prioritize firms who have actively put in place processes to reduce selection-bias in the sourcing process.  Firms who rely heavily on network, scouts, cold-calling or other human-driven deal generation will almost certainly be impacted by subconscious bias and will continue to concentrate investment in non-diverse founders, but also in far more competitive investment opportunities and thus face higher entry valuations/lower returns.  Firms developing proprietary technology systems that drive sourcing leads based on a company’s data and performance, rather than the founder’s network/access (or lack thereof) will drive a more diverse flow of founders in less competitive opportunities.  Additionally, LPs should seek out GPs who have a programmatic approach to supporting their portfolio companies operationally post-close.  Funds who can shepherd company operations will drive outsized returns, and will need this to compensate for diverse founders who often don’t have the same access to mentorship/advisers/talent pool as those plugged into more ‘traditional’ networks.

Our world is full of possibilities, but they’re not always open to everyone. At Mastercard, we’re focused on designing a better world for women because we know that when we do, we create a better world for us all. We believe that together, we can create an economy that’s more equitable and inclusive. Real results are seen when engagement is substantive and integral to our operations and core goals, not an afterthought or extracurricular activity. In 2021, we also launched Strive — a global initiative to accelerate economic recovery for small businesses — which is expected to enable women entrepreneurs to unlock their potential through access to capital, digital solutions, and networks. In that same year, Mastercard announced a multi-million-dollar investment in Fearless Fund, a venture capital fund built by women of color to support women of color founded and co-founded businesses in the CPG, Food & Beverage, Beauty, Fashion, and Technology sectors.

Our continued support of Beyond the Billion is an example of how we’re activating our network and applying our expertise to help ensure an inclusive and equitable economy becomes a reality for women.