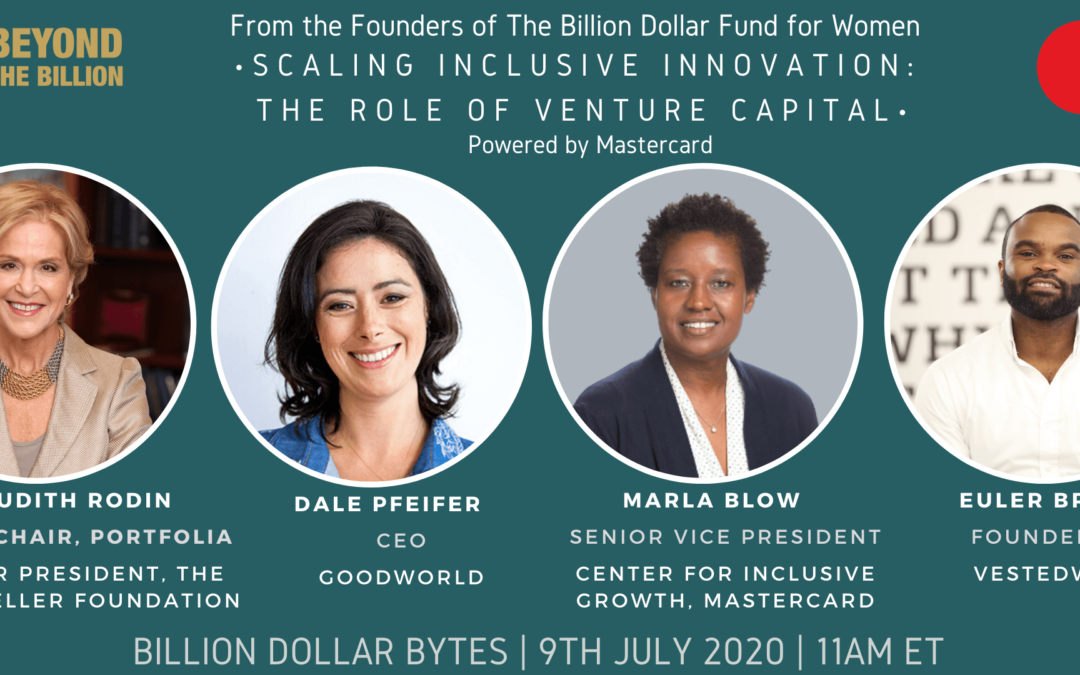 The Billion Dollar Bytes brought to you by Beyond The Billion, powered by Mastercard is a virtual series focused on fueling women-led innovation.

Today’s global economies are driven as much by their ability to innovate and adapt as they are by their ability to produce and consume, as in the past. Yet, so many in both developed and developing nations are left out of the benefits of this evolution. Further, founders and funders of color face structural barriers, embedded bias and other forms of racism when building their businesses and raising capital - with more than 75% of VC funding going to all-white teams, despite diverse founding and executive teams generating higher median realized multiples (RMs) on acquisitions and IPOs in comparison.

Too much of our world was designed without women in mind –and without women involved. Even today, inequality and exclusion still hold women back. That’s why Beyond The Billion and Mastercard are pushing our networks further, forging ambitious partnerships and championing the people, businesses, and innovations that are transforming the way our world works.

Marla Blow is the North America lead at the Mastercard Center for Inclusive Growth. Previously, she was Founder and CEO of FS Card Inc. (sold to a strategic acquirer). Marla is long-tenured in consumer finance with experience as an executive, a Federal regulator, an entrepreneur, an angel investor, and public and private board service. Ms. Blow is a Henry Crown Fellow as part of the Aspen Global Leadership Network, and holds an MBA from Stanford University’s Graduate School of Business and received her BS in Economics from the Wharton School at the University of Pennsylvania.

Judith Rodin is a pioneer, innovator, change-maker and global thought-leader, having led and transformed two global institutions: The Rockefeller Foundation and the University of Pennsylvania. Rodin serves as the Chair of the Board at both Portfolia and Prodigy Finance, and is a member of the board for leading corporations and nonprofits. She has authored more than 200 academic articles and chapters, and has written or co-written 15 books, including The Power of Impact Investing: Putting Markets to Work for Profit and Global Good and The Resilience Dividend: Being Strong in a World Where Things Go Wrong. Her next book, soon to be released by Wharton School Press, is entitled Just Money.

Dale Nirvani Pfeifer is on a mission to make payments a global force for good. Her company Goodworld makes charitable giving on Facebook, Twitter and Instagram frictionless, viral and secure and is used by over 3000 of the world’s top charities. Goodworld was recently named one of the World’s Most Innovative Companies by Fast Company magazine and was awarded a Timmy as DC’s Best Tech Startup. Dale was recently honored as New Zealand Woman of the Year (community category), 100 Most Powerful Women in DC by the Washingtonian magazine and one of Washington Business Journal’s “40 Under 40” business leaders.

Euler Bropleh is the founder and Managing Director of VestedWorld, a venture capital fund focused on investing in underserved markets around the world, including several markets in sub-Saharan Africa. Prior to VestedWorld, he was an attorney with Latham & Watkins and Vedder Price, where his practice focused on mergers and acquisitions, private equity, and venture capital transactions.

THIS EPISODE WAS PROUDLY POWERED BY MASTERCARD:

Mastercard is a global technology company in the payments industry. Our mission is to connect and power an inclusive, digital economy that benefits everyone, everywhere by making transactions safe, simple, smart, and accessible. Using secure data and networks, partnerships and passion, our innovations and solutions help individuals, financial institutions, governments, and businesses realize their greatest potential. Our decency quotient, or DQ, drives our culture and everything we do inside and outside of our company. With connections across more than 210 countries and territories, we are building a sustainable world that unlocks priceless possibilities for all.